As published in Chicagolife Magazine)
BY SARAH ZELKEN
Chicagoland’s aging water infrastructure is under more stress than ever, and recent watermain breaks are a telling sign of the disaster that Chicago and all cities with aging watermains are facing.

In September high rise residents in Edgewater were under a boil water order for six buildings on Sheridan Rd. after a watermain broke. There, emergency crews replaced more than 2,800 feet of old pipes dating back to the 1890s.

In April of this year a giant sinkhole opened after a cast iron watermain dating back to 1915 broke during a massive rain storm on Chicago’s South Side and swallowed three cars, including one with a driver still in it.

Most watermains in Chicago were installed between 1880 and 1930. These pipes were mostly made from cast iron and are at the end of their “life cycle” causing high amounts of water loss through leaks and breaks, some of them creating giant sinkholes.
The city repairs and replaces up to 60 miles of old cast-iron and metal pipes each year with PVC pipes, costing hundreds of millions of dollars. These replacements are costly and often lead to traffic chaos among other disruptions like those seen in Edgewater.

With such high costs for replacement a new company that just moved to town may offer a viable alternative. FER-PAL Construction Ltd. uses a technology called Cured-In-Place Piping to restore watermains. This method rehabilitates watermains inside the old one eliminating the need to dig long and intrusive trenches.

This new watermain works by pulling a water-tight woven polyester liner into the old host watermain and injecting it in place with an epoxy resin. The liner is then inflated and cured in place with hot water. Then the services along the water main are reinstated with a robotic drill from inside the watermain to complete the installation.

Typically the more digging needed in a project the more expensive it tends to be. FER-PAL says that their process saves an average of 30% compared the traditional open-cut method. The company also stressed that there is much less driving to haul dirt away from the jobsite and less machinery is used during installation offering an average 98% reduction in greenhouse gases compared to that of traditional open-cut method.

The limited digging also causes less disruption for the immediate neighborhood. Roads can remain open, access to driveways remains clear, traffic is less disrupted and local businesses are spared the hindrance of nearby construction.

“FER-PAL joins a growing list of companies who are choosing Illinois to grow their business,” Gov. Quinn said. “The company is ideally situated to participate in the Clean Water Initiative, which is putting people back to work updating our water systems and infrastructure across Illinois.”

“We are truly excited to open our newest office here. It is great opportunity for the state, the local community and for FER-PAL,” CEO Shaun McKaigue said.

Based in Toronto, FER-PAL was established in 1986 to provide municipalities with watermain rehabilitation services using trenchless technology utilizing their Cure-In-Place-Pipes., which eliminates the need to dig long trenches to replace an aging watermain. This technology has provided municipalities across the U.S. with a cost-effective alternative to traditional watermain replacement.

“FER-PAL hopes the City of Chicago and other Illinois cities make the change to trenchless watermain rehabilitation over open-cut replacement. What’s not to like about this new technology?,” asks McKaigue. 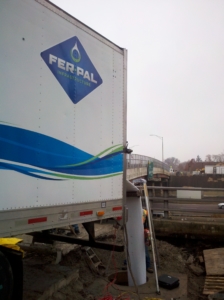