Gov. Pat Quinn joined Fer-Pal Construction executives Tuesday to open the watermain rehabilitation company’s new U.S. headquarters in Elgin, creating 50 jobs with a potential of up to $260,000 in state incentives.

Fer-Pal will receive $26,000 per year for up to 10 years in Edge tax credits through the Illinois Department of Commerce and Economic Opportunity, based solely on job creation. It will get the tax credits only if the jobs are created, said governor’s spokesman Dave Blanchette.
Toronto-based Fer-Pal, established in 1986, employs 142 people now and provides municipalities with watermain rehabilitation services using “trenchless technology.” It uses a process to create a new pipe within the old existing pipe, eliminating the need to dig long trenches to replace an aging watermain. The technology has provided municipalities across the United States with a cost-effective alternative to traditional watermain replacement, the governor’s office said.

“There will be no (job) transfers from the Toronto office to the Elgin office,” said Blanchette. “All positions needed to run the operation in the Elgin office will be hired locally. There will be additional jobs created in the Toronto office to help support their expanding operations in the Elgin office such as in the accounting/payroll/and HR divisions,” Blanchette said.
InsideToronto.com reported last month that Fer-Pal participated in a trade mission to the Chicago area in September 2012. At that time, Toronto Mayor Rob Ford and several councilors accompanied a number of business leaders to Chicago for the purpose of promoting trade and economic development opportunities between Toronto and its sister city, InsideToronto.com reported. Fer-Pal, which also has an office in Michigan, had about 80 employees in the United States, said InsideToronto.com.

“Fer-Pal joins a growing list of companies who are choosing Illinois to grow their business,” Quinn said in a statement. “The company is also ideally situated to participate in the Clean Water Initiative, which is putting people back to work updating our water systems and infrastructure across Illinois.”

Governor Quinn met with Fer-Pal CEO Shaun McKaigue and Toronto Mayor Rob Ford during their Chicago visit. Later, Quinn solidified the relationship with Fer-Pal while visiting Mayor Ford in Toronto and convinced the firm to locate its U.S. headquarters in Elgin, Quinn’s office said in a release.

“We are truly excited to open our newest office in Elgin, Ill. It is great opportunity for the state, the local community and for Fer-Pal,” CEO Shaun McKaigue said in the release.
Fer-Pal’s recruitment is part of a strategy to recruit innovative water technology companies to Illinois. Firms like Fer-Pal, Ecolab, and Grundfos are attracted by the state’s Clean Water Initiative and are a source of growing strength for the state’s economy.

Quinn launched the $1 billion Illinois Clean Water Initiative in his 2012 state of the State Address to help local governments facing a critical need to overhaul aging drinking water and wastewater treatment plants and distribution and collection systems. The ICWI is funded with annual federal grants, funds from the American Recovery and Reinvestment Act and additional principal and interest from loan repayments. No new state tax dollars are used, Quinn said. 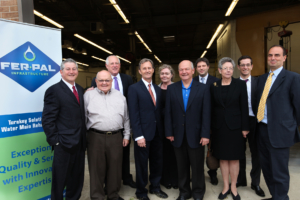