Death, Taxes and Yes, Even Watermain Repairs Are All Inevitable

As published in Trenchless Online.

Most everyone knows the adage that two things in life are inevitable — death and taxes. Over the past few years, officials in villages, towns and cities across North America, and those responsible for municipal water systems, are discovering something else is inevitable — replacing or repairing aging and deteriorating municipal drinking water systems.

Such was the case of the Village of Mount Prospect, a small village (pop.54,167) in Elk Grove and Wheeling Townships in Cook County, Ill., about 22 miles northwest of downtown Chicago. Though the village maintains its own water supply system, there are some sections of town in which responsibility for owning and operating the water system is Illinois American Water (Woodridge, Ill.), whose parent company American Water Works (NYSE:AWK) is the largest investor-owned U.S. water and waste utility in the United States.

Like other towns and cities that are experiencing an ever-increasing number of recurring watermain breaks and leaks in buried systems, which are reported to occur nationally some 250,000 times each year because of an old, deteriorating buried water system infrastructure, the mere thought of having to replace or repair water systems is daunting for many reasons. But again, repairing major sections or whole systems is now inevitable.

Among the concerns is the large expense, the intrusive nature of having to take out and repair old piping and/or replace it, and the weeks or even months it takes to do the job, not to mention the inconvenience to customers who rely on municipal water. Further, it is estimated in a recent water pipe study, that the United States will need $1 trillion or more to fix and update drinking water lines over the next 25 years.

Ironically, and unfortunately, where aging sewer pipe systems have not been using open-cut technology to repair or update piping, but rather relining sewer pipe mains, repair of deteriorating drinking water systems have been slow to adapt to trenchless technologies. So, repairs or replacement was necessary for the water pipes in the Burning Bush Lane section of Mount Prospect. Illinois American Water officials evaluated traditional open-cut methods of main replacement vs. the trenchless technology of cured-in-place (CIP) watermain pipe lining.

• At a cost far less than traditional, old-fashioned pipe replacement, as much as 20 to 40 percent less, and even more when the watermain is in the backyards, under roadways, driveways, sidewalks and tree-lined areas;
• Within a period of less than two or three weeks;
• Without any major disruption or destruction to the environment;
• With the assurance that the new “piping” would last at least 50 years; and
• Without disruption of service and minimal complaints by citizens whose homes are tied into the water system.

Why Is It Different and Less Costly?

According to sources at Aqua-Pipe, Sanexen Environmental Services, structural watermain rehabilitation has been used for a dozen or so years, with more than 2 million feet installed. The firm notes that with municipalities and/or maintenance companies along with its customers in the United States are a “little bit behind Canada applying this technology.” They are confident that once municipalities use the techniques, even the residents will ask for it.

A white paper issued by American Water notes that rehabilitation rather than replacement is fast becoming the preferred method of fixing broken, aged and deteriorated pipe where cleaning and lining is a preferred method.
The simple, quick and low-cost steps to pipe relining used by Aqua-Pipe and its licensees and specifically the FER-PAL Construction project in Mount Prospect include:

• Locating the pipe to be rehabilitated (eight blocks in Mount Prospect’s Burning Bush Lane section);
• Advanced and detailed customer notifications and coordination with the Village to ensure a coordinated and cooperative implementation of the project;
• Installing temporary by-passes through customer watermains or garden spigots;
• Digging small access pits at each end of the section(s) to be fixed;
• Cleaning the pipe with a metal chain reamer and a high-pressure water nozzle followed by a closed-circuit TV inspection;
• Using special robots, inserting plugs to every service/customer connection (from inside the pipe);
• Impregnating the liner through the existing piping from an on-site truck by injecting the epoxy between two layers of a liner while pulling it through the existing pipe;
• Forming the liner by sending special swabs from one end to the other;
• Circulating hot water to cure the liner;
• Performing a hydrostatic pressure test;
• Reinstating service connections by drilling inside the pipe with specialized robotic equipment;
• Disinfecting the new liner in the pipe;
• Reconnecting the water distribution system; and finally,
• Removing the temporary by-passes and restoring the system.

In this way, minimal excavation and traffic control was all that was needed, disruptions and the need to repair or replace trees, fences, sidewalks or yards and no heavy equipment was needed, minimal materials were used, and the entire job was done quickly.

The personnel key to the initiation, approvals and installation on this project included:
– Keith Cheek, operations supervisor, Richard Herman, engineering manager and Christopher Crain, engineering technician from the Illinois American Water Company in Woodridge, Ill.;
– Donna Brown, project engineer from the Village of Mount Prospect who coordinated approval of the permits; and
– Lou Magurno, senior project manager for FER-PAL Construction, whose firm is a licensee of Sanexen’s Aqua-Pipe manufacturer. FER-PAL, with headquarters in Toronto, Canada, has an office in Taylor, Mich. FER-PAL also arranged for the demonstration.

As Cheek explained it, “Several years ago, on behalf of a previous employer of American Water Works, I had occasion to go to Canada to learn about and experience the fast-growing technology of trenchless rehabilitation of watermain. I was immediately convinced that this was the way to go, when recently we had to do something about recurring problems with our system in the Village of Mount Prospect. Although trenchless rehabilitation in sewer systems has become rather commonplace, use of this technology for water systems has been slower to catch on, despite obvious short and long-term benefits. We were eager to use this approach for Mount Prospect and are now looking at doing it in other municipalities where we own the systems based on this success.”

Magurno noted that “This new method essentially allows for the building of a fully structural new pipe within an old pipe that can last at least another 50 years. It improves fire flows and keeps the pressure readings at acceptable levels, and surprisingly uses materials readily available from Aqua-Pipe and on the open market. While the relining of watermains is simply another tool in our arsenal of watermain rehabilitation or replacement repair approaches, it is definitely a better alternative when the same size diameter pipe is possible.”

A specially-arranged demonstration by FER-PAL in Mount Prospect during the installation in which 50 attendees from neighboring municipalities attended was one more step toward convincing customers and professionals alike of the many advantages of cure in place piping. The visitors to the demonstration came from Milwaukee, as well as Moline, Lombard, Joliet, Batavia, Palatine, LaGrange, Buffalo Grove, Elk Grove and Rockford, among other Illinois towns and cities. Seven of them confirmed a project for the upcoming year, and most of the others are expected to recommend to their local water authorities or water system management firms that advanced trenchless technology worth serious consideration in the repair of their deteriorating water piping. 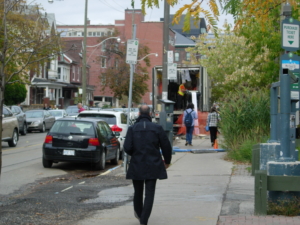